Romance That's 'Out Of This World'

EXCERPT FROM DANCING WITH FATE 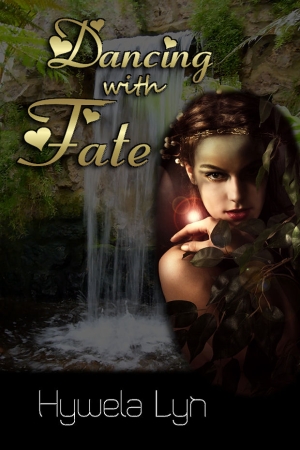 How long had he stood there?  Should she risk using her magic to make him forget?  One look at his face however, and all such thoughts flew from her mind.  A strong jaw, firm mouth and eyes as blue and gentle as the Aegean Sea set her heart beating with unexpected desire.  Golden hair, rivalling that of Apollo himself, touched his broad shoulders.

He was young.  He wore an inar or tunic, fastened with a leather belt, and long truis clad his legs.  Common soldiers' garb - but she was sure he was no soldier.  He had the bearing of a chieftain or a nobleman and his brat, draped over one shoulder, was fringed and decorated in rich colours - the mark of someone of high standing and nobility. He was very tall, and slender, and there was a strength about him.  He reminded her of a tree that would bend in a storm but not break.  That was not all.  His aura told her he was, indeed, no ordinary man. Never had she seen a mortal man so striking.    Perhaps not as devastatingly handsome as some, but his face was oh, so pleasing to look upon.  There was unique character there, something that set him apart from his fellow men.  It went deeper than mere good looks.  She felt she could gaze at him forever.  She would have touched his mind with her own but at that moment he spoke, the rich timbre of his voice sending shivers through her soul.

"Greek Mythology has rarely been so much fun to read. Hywela Lyn builds an excellent love story even with all the tongue twisting names that add even more fun to the tale.

Such a simple love story made great by the addition of the gods, muses, and Fates with their twists to life. Even the fifth century had some truly honorable men including Myrddin who refuses to give in to the feelings he has for Cora until he finds his Gwendolyn. She was betrothed to him by his family long ago. When she tells her with her own lips and behavior, doting on Madog, he finally believes his quest was in vain.

Terpsichore/Cora fell in lust at first site with Myrddin, loved him more for saving her from the Ellylldan/Goblin fire. Seems her half brother Ares, the god of war, is mad about something and attacks Myrddin. The spear of Ares is not a good thing to have sticking out of your body!

I know it sounds like sick humor but it's really a hoot when the Fates play games with Terpsichore. Her man lays dying, she's as serious as death, willing to give up anything to save his life and the Fates are playing her for a sucker. This may be a fantasy but I've felt like I was in that kind of situation once or twice or a hundred times myself! I have to recommend this book highly. Not only because I like it so much and it's excellent entertainment but I just can't take the chance that the gods might get crazy if I don't"

"If you haven't yet started to read the Song of Muses stories then I suggest you start now with this one by Hywela Lyn. This is the first time I've been able to read anything by this author, and I am very much looking forward to reading more from her. Her flow of language pulled me into the story from the very beginning and forced me to continue reading until I had reached the end. Her description of the world of the Greek gods was very well done and insightful. I enjoyed Terpsichore, Muse of the Dance, immensely. Her independent spirit and sensuality is just what a daughter of Zeus should be. I completely loved the plotting of the story and the true task this Muse had before her. The action was orchestrated with just enough description, the dialogue and description vivid and captivating.

"Dancing With Fate" is a simple love story, made very intriguing with magical characters. Hywela Lyn wrote a beautiful and touching story of undying love and characters that are prepared to give everything, even their souls, for the other's life. Myrddin and Terpsichore were both very strong characters, each willing to give their all to what they believed in. For me, Greek mythology can be a bit hard to read. I do not know much about it, so it can be hard to follow. However, Ms. Lyn did such a fantastic job of describing each character that I never knew I could enjoy Greek myths quite so much. I wholeheartedly recommend this book, filled with vivid landscapes, Greek myths, and some of the strongest characters I have read in a while."

"Hywela Lyn has packed enough adventure into Dancing with Fate to rival a full length novel. I am a huge fan of stories of Camelot and the famed King Arthur and Merlin so I was especially intrigued by the connection between those tales and this book. What a fascinating and creative take on the origins of Merlin we find in Dancing with Fate.

The love story of Terpsichore and Myrddin is quite touching. Especially in light of the obstacles in their path that include a past betrothal, an angry god, a legend yet to occur, and goblin fire. As if this wasn?t enough, we have the addition of the tricky Fates who can twist anything around, which makes it rather difficult for Terpsichore to strike a particular bargain she so desperately needs.

Hywela Lyn's addition to the Song of the Muses series is a wonderful fantasy to read when you have the urge to pass some time with a good book. I have not read anything else by this author, but I enjoyed Dancing with Fate enough that I am considering adding more works by the author to my collection. "

"When the Muse of Dance, Terpsichore comesacross handsome and enthralling, Myrddin be prepared to witness a love story unlike any other. A well written, refreshing and truly imaginative read, Hywela Lyn kept me turning the pages in "Dancing With Fate!"
~Sky Purington, Author of Fate's Monolith

***
"Hywela Lyn is a skillful storyteller. I'm impressed by not only how her descriptions are rich, vibrant, and flowing, but how she weaves the qualities of courage, honor and loyalty into the question of how much a woman-mortal or not-will sacrifice to save the life of the man she loves. By the time you finish this book, you'll never look at the legend of Merlin, or the phrase 'dancing with fate' the same way again!"
~Miss Mae, Author of the best selling "See No
Evil, My Pretty Lady"

Love, Love, Love it!
By Cat Kaulback
Dancing With Fate is sooo about love. A fantastic ending to boot! The story took me far from my daily routine, my familiar sights and sounds, and my expectations. Wow! Where do I start - at the beginning - middle - or end; they are all my favorite places. As is stated about the content: it is "out of this world" in a realm inhabited by Mythological characters that seem to sit beside me. The main figure is likable and lovable, as is her beau. Throughout, while being challenged off and on, I was hoping they could stay together. I can't give away too much here, so I'm off to purchase the other books by Hywela Lyn - a very lovely and talented author, indeed! Worlds of thanks to you, Hywela...from Cat Kaulback, Kinsman, OH (visit www.dreamhorseguesthouse.com)

***
5.0 out of 5 stars I absolutely LOVED this story!!
By Roland - Published on Amazon.com
Format:Paperback
As I began reading "Dancing with Fate", it was as if I had walked into an inn at some remote village of the ancient Britons. Grabbing a flagon of ale I proceeded to the fireplace of the common room where a bard was busily tuning a harp. It was a woman, Hywela Lyn by name.

"You have come a long way traveler," she said. "Would you hear a tale?"

"I would hear a tale of love," I replied.

"With love there is pain, are you sure?" I nod in the affirmative.

Lyn begins to play as she tells the story of Terpsichore and Myrddin, a goddess of Olympus and a man of the Celts, who is much more than he first appears. Lyn keeps spinning the words from the harp, giving life to her characters and their setting, gripping the listener so they cannot look away, waiting in anticipation to see what will happen next. "It must have a happy ending," you think, "it must." Does it? I will not tell you. Go to the inn and hear the bard for yourself. This is one of those stories you have not heard yet, and one you will not soon forget.

5.0 out of 5 stars Enchanting Novella
By FrancineHowarth
Format:Kindle Edition
Dancing with Fate is a delightful mixture of Greek myth and Welsh legends. A fantasy romance it is, true enough, yet it captures and enchants a reader into believing semblance of truth, for whence came the oral legend of Merlin (myrddin), and when might such have first captured the imagination of listeners?

Who can resist a Greek Goddess whom possesses power to enchant with help of a lyre and who dances in a captivating manner? No one it seems is safe from her charming engagements, but will Myrddin succumb to Terpischore and will he survive dangers that await him? Ah well, that you will have to find out for yourself by buying this lovely tale of myth, legend and romance.